At a Tail Sale

You may or may not have heard of a tail sale at "name your furry club" fellow reader of the SL Newser. Whether you have heard about one or no,t I thought it would be fun to write an article about one. I myself have been up for auction a few times in furry clubs, and you may ask "what is a tail sale?"

A tail sale is held by a furry club where furries go to offer various services like adult roleplaying with the buyer, artwork, or writing or scripting or anything else you may think of. The purpose of a tail sale for any furry club is to raise funds to pay off their monthly tier and more improvements of the club. In general the bid on whatever furry is spilt in half between the club hosting the tail sale and the furry who is up for sale. 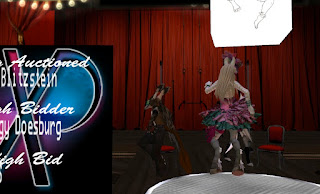 For example Bixyl my boss could go up for sale offering a cartoon and puns for whoever buys him. So if Jane Cleanslate bids 2,000L on him then 1,000 would go to Bixyl and 1,000 to the club. Bob Magne really wants one of one of Bixyl’s cartoons though so he outbids Jane’s bid by 500. Jane pouts and Bob at the last call buys Bixyl for 2,500 same as before ½ to Bixyl ½ to the club.

What I offer are my writing services for whoever buys me. I write adult stories and also once I did write a fantasy adventure for Chazore Ayers. I did include a couple of my characters from my children’s book as adults and she gave me a large bonus when I finally finished it as it was rather long. I’ve been in tail sales around furry clubs for a while now.


On February the 9th, the furry club Anthroxtacy held their tail sale which they try to do a few times per year. When I warped to their sim there was already a large crowd of furries and a human or two waiting around for the tail sale to start. It took a while to rez while Akira was playing dance music. At 2pm SL or 5pm east coast Hikari Vixen took over the stream and began the tail sale itself. I was handed a notecard in a tail sale group outside the regular AX group (AX Short for Anthroxtacy). It told me the order of everyone going up for sale I was towards the middle. Each furry goes up on the podium and the host as Hikari describes what that furry is offering. After a period of time she says first call, second call and finally Hikari closes the sale. The furry who was bought now owes the buyer whatever services that the furry offered.

The first furry Lyla Chauveau a tan colored raccoon went up on the podium. Hikari in a happy go lucky voice announced that her bid before the actual sale was 10,000 Linden for adult role-play services. 10k Linden! That’s a lot for a furry’s services, but that’s usual for a tail sale that furries go for high prices especially the lady ones. After a few minutes of taunting the audience to bid higher Hikari closed the sale to Lyla’s buyer at 10,000.

Me and the other furries up for sale waited in a corner a dressing room as the tail sale had a burlesque theme so a few of the girl furries wore corsets to fit the theme. As the tail sale went on Hikari announced each furry and what he or she would offer the buyer. Surianna the head playmate of AX as a snow leopard offered her incredible RP services in adult ways and sold for 5,000L.Akira went for 20k 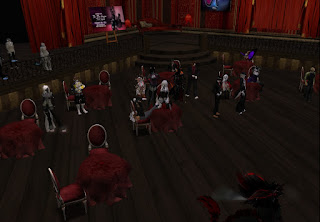 Linden to Jayrek for artwork or adult role-play services. Typing in 20,000 in the buy Linden bar I saw that if I wanted to buy 20K Linden with real money it would come to $81.27 in US dollars! That’s a lot to bid for someone in Second Life.

Dahlia Blitzstein before me sold her art work skills at a very high price. She had a cube above her head showing off her art work for everyone to see. I found myself looking at the cube looking at the detail of her computer artwork and wishing to buy her artwork. Sadly my hopes were shot down when I saw her bid starting at 6k Linden. Hikari was calling on the crowd to bid higher for her high quality artwork. Almost before the final call Mythology Doesburg who owns AX bid back and forth between Helios and himself. Mythology AKA Myffy as he likes to be called in the end bought Dahlila for 22,000 Linden! That’s a little more than what Jayrek paid for Akira.

Seeing that Dahlia was ahead of me I jumped over to a scripted 1920’s chair behind her as Dahlia auction was closed. I imed Hikari saying I was ready and she posted my tail sale info for everyone to see while she read it out loud.

One lady bought me for a mere 1,000 as a present for her SL wife, so I only got 500. I felt discouraged that I could of gotten more, but I also reminded myself I could of walked away with a big fat zero. I can’t cry over spilled milk, so instead of grumping about it I imed her to see what she wanted as a story. She wants to see what her SL wife wants too.

Looking to make some Linden and show everyone a talent you have? Tail sales are the way to go. Far as I know humans would be allowed to be in a tail sale just like a furry. The Anthroxtacy tail sale is over, but if you keep your ears open I’m sure there are other tail sales around Second Life too.

Grease Coakes
Posted by Bixyl Shuftan at 6:00 AM