The Heart of Gold Club

by Grease Coakes
In the club scene of Second Life it’s hard to find one that stands out in the thousands on the grid. One does simply by its design and the name reference. "Heart of Gold" created by Ezrin Sabre and Saros Eclipse is a cozy club made for furries, but of course humans and anyone else are also welcome. Heart of Gold has been around for a year and half and it’s still going strong. 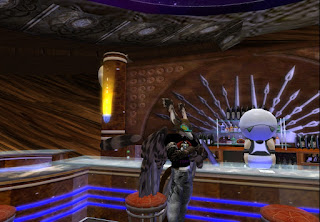 The ship name is from the popular book series the Hitchhiker’s Guide to the Galaxy from the late Douglas Adams. Heart of Gold is the starship with the improbability drive.  And yes the ship actually has an improbability drive that Saros built in. There’s also Marvin the depressed robot downstairs as the barkeep.

Saros also owns an anime series called Hi No Tori which in Japanese translates to firebird or bird of fire. Ezrin told me that the series is about (surprise) a phoenix or firebird that travels the universe and teach various lessons to people. The ship itself is also a starship shaped very much like a bird with fiery feathers but also with a mechanical steampunk look. The dance floor itself is clear so you can look down below in the inside of the star ship. The starship itself is also set in outer space where the Heart of Gold/fire bird travels through. The graphics are wonderful as you dance or hang out the upper deck as the ship travels slowly. It seems like you’re actually in outer space but not inky blackness but a colorful environment that seems like nebulae in an explosion of color. 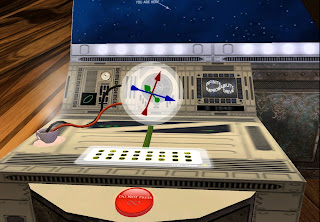 Saros built the club herself as it helps her relax and Ezrin says the original club him and her owned was called Ari-Sen which had a big mushroom in the middle of it. When they moved to a sim with a naughty name, they put the human clubs out of business as they drew in a consistent crowd. DJ Aurora Avila was one of the djs at Ari-Sen until she moved on to AX (also known as Anthroxtacy).
Heart of Gold is active at night when their dj/s come out to play for a small but growing crowd that comes to hear live dj sets. Amurtigeress Korobase, a griffin dj, plays a wide variety of music from trance to movie theme music and various other genres as she is also the head dj at Heart of Gold. She djs Tuesday and Thursday 6-10 SL time and every other Friday 6-9 SL time. Sylys Sable a friend of mine also djs here. 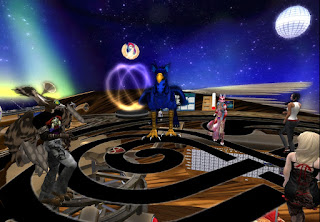 I also like Heart of Gold as they were the first club to hire me as a dj in Second life. A club turned me down having no dj experience so I went to Heart of Gold instead and Ezrin and Amurtigress hired me right away wanting to hear what I played. I play a mix of dance music mixed in with video game remixes aimed at the dance floor. I dj Monday night 5-8 SL time and also 3-6 SL time on Wedsday night before Ezrin on the same night. The same night I wrote this article I held a contest that whenever I played a life force or mega man themed remix then someone tell me through IM or main chat and that person won a dj mix I just made that day. Hoppy and Zzri both won a dj mix from me for iming me when a megaman song played.
You want to see an amazing club and hear great music? Heart of gold is a great place to hang out with your friends and or dance the night away while you get lost in space.
Grease Coakes
Posted by Bixyl Shuftan at 6:00 AM