Zynga and "The Sims Social"

Most anyone who has a computer has been on or at least heard about Facebook. The website where you connect with friends online or locally around your geographical area. Besides keeping in touch with your friends by posting on their walls, there are lots of mini games to get involved in like Farmville or Mafia Wars. There’s no real end to these games, or goals as you keep gaining levels in any of the Zynga games. The games are just a way to connect with friends and end up eating up a lot of your free time.

Right now EA is suing Zynga for violating copyright laws for ripping off their popular game, The Sims and making their own version “The Ville.” Playing the original sims when it first came out, I had a good idea what to expect from the sims. “The Sims Social” made by EA is their Facebook version of their very own Sims. Like the Sims series, you create your own person and interact with people throughout the Facebook network with various requests for more energy or items to complete sets of items. You use energy to do actions like the Sims like being social with your neighbor or eating some pie. Also you get to pick out clothes and a characteristic for your sim. I picked out a charming personality. Just like original Sims you have to keep an eye on the needs gauges making sure your sim makes it to the bathroom and gets enough sleep. 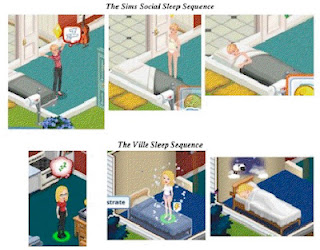 Playing The Ville seemed very much like playing EA’s the social Sims. You do the same actions and the ville offered the same personality types and similar clothes and goals. It seemed confusing whether I was playing either EA’s “The Sims Social” or Zynga’s “The Ville.” The Sims animations when talking to other Sims seemed identical. Also the gag of your sim eating a tiny or big bite from the pie is in both versions. When you sim has a tiny bite, he or she shrinks. A big bite will make your character bigger. The music also seems the same the easy breezy music style of the Sims as the game loads up seems identical when you play Zynga’s version.
It seems very clear that Zynga wanted to ride the popularity of the widely successful Sims from EA and create their own version. My question was it worth it for Zynga to carbon copy the Sims and put themselves in a bad position to be sued? Zynga already has popular games like Farmville on Facebook and many others. Seemed like an unnecessary risk to take over a single game.
I wonder how the lawsuit will turn out? Zynga’s future seems cloudy now when before it had a strong standing with Facebook making endless games that tend to be addictive. Sometimes you have to leave a classic idea alone and move on to make your own classics hopefully Zynga will learn that lesson.
For more information, check out the article from CNN.
Grease Coakes
Posted by Bixyl Shuftan at 6:00 AM