Commentary: A Few Words on "My Little Pony" 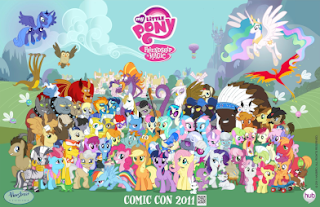 I have never been what one would call a “Brony” I have never even watched the show when I was little or even a full episode. But I have interacted with some MAJOR fans of the show in Second Life and they did their best to try and teach me about their passion for “My Little Pony.” They even took me to one of the many MLP sims, some stayed in character as this bipedal fox wandered around (I have to say I enjoyed that). I even got a bipedal version of “Vinyl” when I DJ’d a party for some of the MLP’s in Second Life.

There is a LARGE fandom in Second Life, been there the entire time I have been in SL and I have gotten to know many fans of the show. I have even visited a Minecraft world built to scale. After all that I had still never watched an episode of “My Little Pony” So I decided to finally sit down and watch it, since it is on netflix I figured “Why the hell not?” I started at the beginning and I am currently in the 7th season, (I had no idea there were so many).  There has been a LOT of “art” shared on common Discord servers I am on, and I am glad to say it is not like the art, that it IS a children's show (LOL). I like some characters more than others, Luna, Zacora, and Twilight, but the main story is around Twilight and her five friends teaching about “The magic of friendship.” 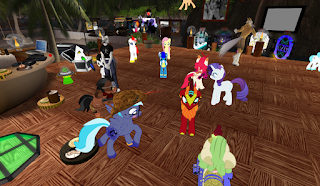 But for the life of me I can NOT see a reason for the hate people have shown for those that like the show. I know of a lot WORSE shows that I won’t mention. I find them stupid, inane, and just down right drivel.  But I would never look down on someone enjoying that crap. We just agree to disagree. Well, for most of the time. I have come across people that if I didn’t like their favorite show, I was an idiot and had no education or appreciation for the more “sophisticated”  shows….. Bleh. But I see people actively “Shaming” those that enjoy the show, I am a bit familiar with this since I do count myself a furry and have felt that sting myself.

But what really surprises me, is that I have heard of Furries and Bronies attacking each other, Seriously? What the heck is wrong with them? They come from a similar spectrum of fandom (Goddess I know I am going to get a lot of hate for that one). 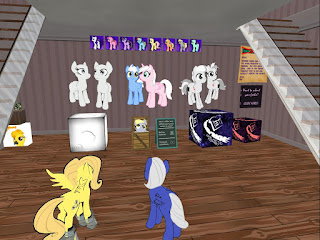 Live and let live is my opinion, it is something they enjoy, not hurting anyone. So why bother them? I know you're asking “Are you a “Brony now?” Well, to be honest I don’t know how to answer that. Do I enjoy the show? Yes. Am I going to adopt pony speak and make my own pony? No, I don’t think so, because I like who I am.

We all like what we like, and as long as you’re not hurting anyone, what's the big deal? Some people compare this to a “Sick fetish” and my answer to them is a resounding… So? There are a lot worse ones out there, they aren’t hurting anyone. They are enjoying their lives so leave them alone!

Just relax, have a cup of coffee and relax, all our lives would be better if more people did this.  As for me, I am going to get another cup of coffee and finish season 7. Until next time, Enjoy your life and let others enjoy theirs.