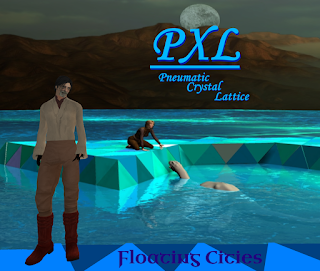 In our six years in SL, with three accounts, we have played as hundreds of avatars and travelled all over the grid. One of these avatars was created for a special purpose and has a unique name and appearance. His name is Rick and he is the spittin' image of the director of this army of avatars, the guy at the keyboard, Rick Audette. Rick's raison d'etre, in Second Life, is to design, build and photograph structures that he has spent 50 years developing and testing in real life, the Pneumatic Crystal Lattice, PXL for short.


The detailed, scientific description for this building technique can be found at http://www.geocities.ws/rick_audette/ . In short, it involves combining cellular biology with space frame technology to make building components very light weight and strong, by balancing outer tension forces in fabric skins with inner compression forces in air bladders or balloons. The result is a structure that is light and strong, like a football or car tires. The PXL principle works at any scale. It was derived from the study of how microscopic soft cells in the body work together to make rigid, erect, bone-like areas. Several generations of prototypes have tested assemblies of triangles from 6" to 18" sides. The first model was made with (20) 6" cloth triangles laced together to form two octahedron and two tetrahedron chambers. A latex party balloon was inserted into each cavity, leaving the stem sticking out. As each balloon was inflated, until it filled and bulged it's cavity, then the tied off stem was also pushed inside. To test the strength of this tiny assembly, I placed it on a wood stool and challenged my "heavy boned" buddy to sit on it hard enough to pop some balloons. He bounced up and down, until red in the face, but could do no damage. When it was shown to a Mechanical Engineer, you could see a look of awe on his face and a whiff of smoke coming out the top of his head. It blew his mind. 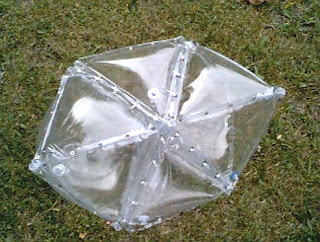 A later style protype was an attempt to combine the outer triangle skin and inner balloon. Triangles, 18" on each side were cut from vinyl shower curtains and glued together to form two octahedron and two tetrahedron balloons. Each balloon had a beach ball fill nozzle added, for inflation. This use of the PXL principle proved somewhat impractical, because it required tooling for two types of balloons and it was hard to make them leak-proof.

A third style of prototypes was made, making the triangles into balloons, using a custom made heat sealing tool. These are easier to make than the octahedron and tetrahedron balloons, but assemblies were somewhat less buoyant than the first two prototypes. The work-around for this would be to add balloons to the cavities formed by the inflated triangles. Another impractical feature was, this style would require a supply of vinyl and electricity to manufacture. For PXL technology to truly be a gift to the world, they must be built without any high-tech materials or energy sources. The first prototypes turned out to be the best, for this reason. Making and sewing cloth is ancient technology. Anybody in the world with cloth, needle and thread can make cloth triangles with grommet holes on the edges. The internal cavities don't need to be balloons either. Pieces of Styrofoam, cork and empty plastic bottles could be used for buoyancy. A man in Mexico built his own island, using discarded water bottles. He even has a tree, growing on the island. 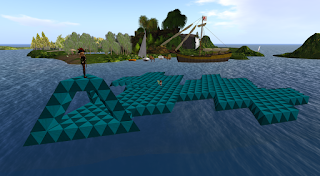 The whole reason for inventing PXLs and putting the ideas into Public Domain was to offer mankind greater Freedom. In the past, if you were a member of a minority community, creating a kingdom where your philosophy could flourish meant moving to a swamp or desert that nobody else wanted to live in. With PXL, you can now build your own floating nation and place it in international waters. We'll leave the politics and defense of your island up to you.
When you think about it, a PXL island is much like a Second Life Sim. They both sit on top of the water. We give a special thank you to Erik Mouse, for letting us use the waters around Sunny Beach for our PXL photo shoots and to the SL Newser for letting us share our thought forms with a wider audience. We have been saying, for years, that SL communities could enhance life in the real world, so we also wish to thank you, the readers, for letting us plant these ideas into your imaginations.
Thank you,
"Sha"
Posted by Bixyl Shuftan at 6:00 AM