Thieves are always out there. No matter what you do, there will always be thieves. Though the marketplace wasn't void of thieves, before, they used to actually somewhat respect people's wishes. If someone said not to sell something for more than a certain amount, and they sold it, they wouldn't go over that amount. 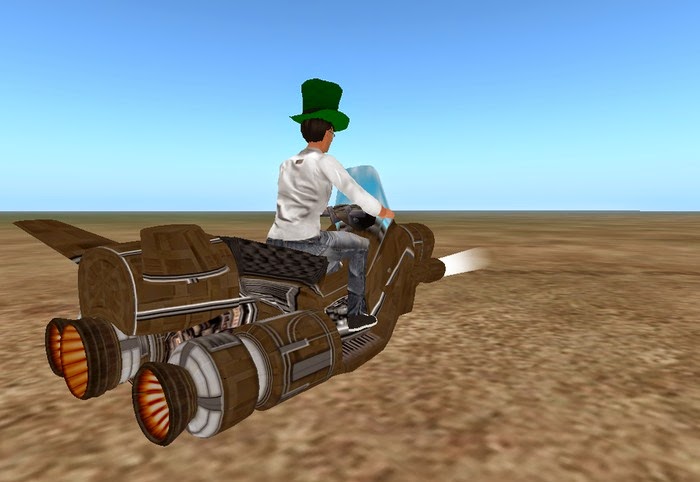 However, today, it seems as if all people care about is money. From selling freebies in a vendor, for 900 linden (you know who you are), to using bots to promote your own items. One person went beyond that, and decided to not only sell a freebie for 30 linden, but not even give the creators, Arcadia Asylum, credit.

The item in question is a hover scooter, and I know most of you are wondering why it's such a big deal. Well, firstly, Arcadia Asylum's admins work really hard to give people their free items, and they deserve credit for it. Secondly, upon receiving any item from Arcadia Asylum, you will also be given a notecard, that says, and I quote,

"*YOU CAN NOT RESELL ANYTHING IN THIS BOX FOR EVEN ONE LINDEN DOLLAR*."

Now some people wouldn't see the problem, thinking the person might not have read the notecard. However, it's a bit hard not to read a notecard that is named: "*****STOP***YOU MUST READ ME FIRST ***STOP*****". It's nearly impossible to not read it. However, even if they didn't read it, they had the means to, right there, so ignorance is not an excuse.

To make matters worse, the seller also decided to promote the stolen item, in the lowest way possible. He created bots, whose sole purpose was to simply buy from his store, and give the items 5 star reviews.

If you're wondering how I know they're bots, well it's simple. No actual person would buy an item, leave a 5 star review, but will only put "ty" or "nice." They would say why it's so good. Plus, in the seller's store, which is comprised of a bunch of stolen items, most of the people that review his items were made the exact same day. All of the people share one thing in common though, their profiles are all blank. Not even a profile pic or a description, yet most of them have been around for at least 8 months.

It's people like this, that make me weary of going to the marketplace. I don't know if the item was stolen or not. However, there is a way to tell if it was stolen, first off, think back, if you have seen it at another store then there is your answer. Another way, is to ask around. What ever you choose to do, always be cautious.

Editors Note: Shortly after Johnny sent me this article, he came across another ripoff. There was a package of furry avatars up for sale for 50L. But upon closer inspection, it contained works from Curious and Aventity which weren't yet retired. Be careful that your "bargain" isn't really from a burglar.
Posted by Bixyl Shuftan at 6:00 AM