Review of World of Warcraft's "Mists of Pandaria," Part One

On September 25th, Blizzard's "World of Warcraft," the most popular of massive multiplayer online games, released it's fourth expansion "Mists of Pandaria." Anticipated for several months, the update promised a number of new features, notably the new continent of Pandaria and a new player race: the Pandaren. 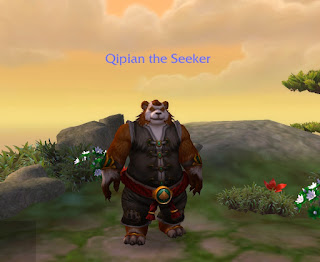 The Pandaren were originally created as an April Fool's joke, but to Blizzard's surprise the response was a positive one. So they were included in the Warcraft III computer game. The Pandaren are of course panda-like, with females smaller than males and sporting earrings. They also have small tails, with female reds having longer ones. They have a few special features compared to other races. They take less damage from falls. They get double the " Well Fed" stat bonuses from food. They start off with a fifteen point bonus in Cooking. Their "Quaking Palm" can stun a target for a few seconds. And their rested experience bonus lasts twice as long. The latter can be quite helpful for players leveling up a character. Most player classes are available: Warrior, Rouge, Mage, Priest, Shaman, Hunter, and the newest one: the Monk. What truly distinguishes Pandaren from other player races is that they are the first "neutral" one. They don't start out as Alliance or Horde, but choose who to side with near the end of their introductory quests.

Saying the Pandaren background have a Chinese influence is stating the obvious, though this is nothing new with World of Warcraft races such as American Indians with Taruen and Victorian English with Worgen. The plot background describes their last emperor shrouding their lands with an "impenetrable mists" thousands of years ago to protect it from the calamities at the time other lands were facing. Some generations ago, some Pandaren explorers founded a colony on the back of an island-sized sea turtle and their descendants have wandered the ocean since. This is where new Pandaren characters begin. Pandaren and turtles go together in other ways, with Pandaren hunters starting off with a turtle as a combat pet, and their racial mount being the speedy Dragon Turtle. 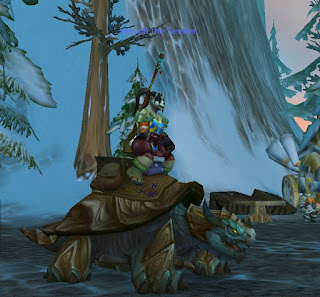 Beginning Pandaren characters start off as training in a small village, then are sent on quests to help out the island, occasionally fighting hostile monkeys and rabbit-like denziens. A few quests are an obvious take on one popular Japanese anime. Around Level 10, one's character and his/her friends come across the source of the island's distress: an airship having crashed into the giant turtle's side. There, they meet up with members of the Alliance and Horde, fighting against naga which have been stirred up by the crash. Once the island has been saved, it's decided to send Pandaren out into "the broken world" to help out it's other peoples. One of the character's friends decides on going over to the Alliance, while another will head to the Horde. The player then decides which path lies before his/her character: Alliance or Horde. After meeting up with the new leader, the player is free on how to progress while his/her friend begins teaching those interested on the ways of the monk.

Blizzard advertises monks as being experts in unarmed combat that "draw their weapons for devastating finishing moves." This doesn't mean going in without a weapon in your slot. Monk characters should be armed as normal. Monks have both an energy bar, and another bar for "Chi" energy. Some energy attacks will build up Chi energy,  while other special attacks use it up. Besides staves (which mine started out with), these characters can use fist weapons, one handed axes, maces, and swords, and polearms. Monks can be of most races, Humans, elves, dwarves, gnomes, and Draenei for the Alliance, Orcs, Tauren, Trolls, Forsaken, and Bloodelves for the Horde, and of course the Pandaren. Monks are limited to cloth and leather armor. Monks have three specializations: Windwalkers who concentrate on melee attacks, Mistweavers whom can heal, and Brewmasters whom can tank with their special moves like the "drunken masters" in some martial arts flicks. 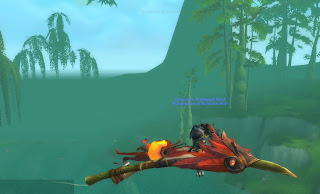 Besides new races and new characters, players have some new territory to cover with their current ones. Level 85 characters upon entering their capital are given a mission. A ship carrying the Prince of Stormwind has run aground on a strange new land. Alliance characters are sent with a force to recover him and secure the land before the Horde does. Horde characters are sent with a force to get him and likewise secure the land before the Alliance. Once getting to Pandaria, both sides come to blows, and besides fighting one another are trying to win over the local Pandarens, as well as fighting the locals old foes whose attention has been aroused, as well as some dark spirits which have also been stirred up.

Characters will be unable to fly on personal mounts, until reaching level 90, the new top level in the game. Until then, there's the Pandaria kite transportation. There's also no mailboxes in the first few places you come across in the Jade Forest Zone, the entrance to Pandara. So saving loot such as player gear for the Auction House and skins & ores may be a problem at first. But if you look around the region, eventually you'll find a village with one. Deeper into the continent are some auction houses, including the Black Market Auction House with some items unavailable anywhere else. In the Black Market, items will be generated and listed by NPCs. There is no buyout price, only bidding.

Part Two of the "Mists of Pandaria" review will cover the Pet Battle System, and what some have been saying about the expansion.