Protest and Banning at Burn2


For the most part, the Burn2 festival has gone well those participating. Last weekend however on Sunday October 21st, there was a protest at the event, followed by a mass banning. According to eyewitnesses, not only were those actively protesting banned from the Burn2 sims, but apparently so were passersby whom did nothing more than watch. 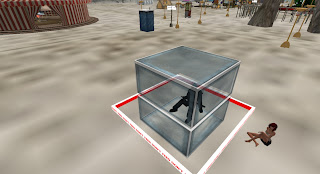 I was contacted about the incident by an eyewitness, saying that Burn2 artist Kandinsky Beaumont needed the help of a Saveme Oh for her exhibit. Trouble was, Saveme wasn't allowed at the Burn, "Saveme … has been banned by LEA, SL9B … she was banned from (the) Burn last year. So Kandinsky was refused. So they started a protest."

I was given a name, Marmaduke Arado, and contacted him. "We were just banned from (the) Burn," he told me, "we were staging an improvised 'protest' performance and were mass banned. Even people just watching were banned … a few just for watching. Without explanation, warning, nothing."

Saveme Oh has a blog at http://savemeoh.wordpress.com/ (very much Not Safe For Work), in which she writes about the Burn2 incident, and previous ones she was involved in. Some people commenting on them accused her of editing out certain details. In her June 24 post, she wrote, "The first day after a Secondlife break I always have the uncontrollable urge to misbehave badly." 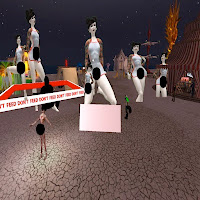 One other blog, Apmel,  had some information. One post (Not Safe For Work), shows pictures of Kandinsky's exhibit before and after she was given a notice, "Your build as a large protest creates disharmony in our community … It damages the joy of the celebration and community spirit. It also is not within the spirit or aesthetics of this event. We have a policy of 'No Drama' within our events. Your build is dramatic because of it's size and focus. This has to change significantly … Please consider a build that will enhance the joy and celebration of Burn2 rather than damage it."

I later met up with two of the leaders of the Burn festival, EmCee Widget and Ronon Carver. EmCee refused to comment on the matter. Ronon did answer, saying she was sorry but they would not talk about these kinds of matters.

It is unknown whether or not any of those not taking part in the protest who were banned have had it reversed.