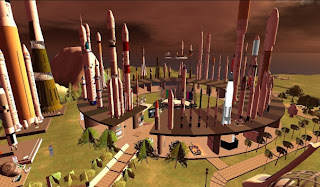 The Spaceport Alpha sim, noted for being home to the International Space Museum, was recently taken offline. According to Daniel Voyager, it and Spaceport Bravo vanished from the Grid sometime in mid-Janurary. These two sims, along with NASA CoLab which closed sometime in early February 2012, were part of the Sci-Lands region in Second Life, aimed at the promotion of astronomy and other sciences. The ISM wasn't owned by NASA, as some people thought, but run by a volunteer group.

Hamlet Au talked with Katherine Prawl, whom was involved with the ISM since the start in 2006. She and others involved could no longer get enough money together to pay the tier. With the discount for nonprofit sims gone, they tried a different tactic: going to the US Internal Revenue Service to get a nonprofit tax exemption. Not surprisingly, the IRS turned them down. They felt the museum was ineligible since it had no real life presence. 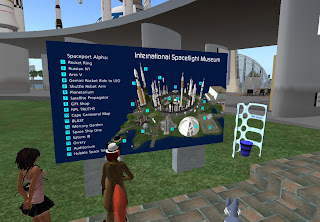 "After nearly six years, Spaceport Alpha, home of the International Spaceflight Museum, together with Spaceport Bravo (a year younger), disappeared from Second Life. These sims represented the completely volunteered efforts of over 100 talented and committed residents, as well as contributions from many more hundreds of supporters."What happened? How could such a highly-acclaimed and beloved destination just go black? It goes back a few years, to the decision to apply for US tax-exempt status as a 501(c)(3) corporation. After nearly a year and a half of work, incorporating, filling out forms, answering questions, and of course paying fees to the government as well as to Linden Lab, the IRS decided not to grant the tax-exemption because the museum only existed in the virtual world, without a "real life" physical presence. (This was in spite of our having a "real life" corporation!) Subsequently, Kat Lemieux (Kat Prawl IRL) resigned as president and was replaced by Paradox Olbers (SL name). Kat became Treasurer, but later resigned that position as well when she went back to grad school and didn't have time to do the job."Things went along pretty well for awhile; Paradox managed to find donors who funded the sims for over a year, but then he had some personal problems (N.B. - I don't feel comfortable explicating that without Paradox's permission, although he did tell me what was going on. It's serious), and the payments to Linden Lab lapsed for months. The first we knew about the problem was around Jan. 13th, when the sims went offline. I tried to log into the land-owning alt's account, but it was disabled for non-payment. At that time, the amount due was over US$1,000, far beyond the means of the now-defunct corporation or the willingness of any of the planning group to pay." 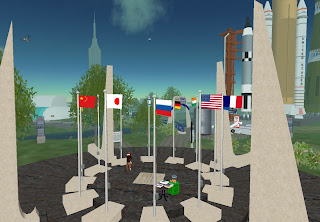 Daniel Voyager noted that the Sci-Lands region used to be quite large. In July 2010, it was almost 70 sims in size. Since then, a number of these science-based sims have dropped off the Grid. With the ISM being a draw, in a sense this represented the loss of one of its more valuable ones.

But there is some good news, at least for the near term. On Wednesday, Katherine Prawl announced that a donor made it possible for them to bring the ISM back on, "as soon as some payment issues are settled." Problem is, they'll need more funding for later. Katherine expressed confidence they should be able to for a while, mentioning "help from several quarters."

Both Daniel Voyager's Blog and the New World Notes articles had a number of comments. Someone called the loss of the ISM no real surprise, "We're not even flying our own astronauts to the International Space Station any more." OpenSim fans suggested exporting the ISM out of Second Life. Trouble was, the ISM group doesn't have permission to copy the various builds and move. And of course the problem of OpenSim having only a tiny fraction of the traffic Second Life has. It would be preserved, but few people would see it. In a sense it would go from a themed exhibit in a museum to placed in the archives. Katherine expressed interest in Hamlet Au's suggestion of a "Crowdfunder" style project, like the recent one that worked very well for Bryn Oh. Beyond that, the comment chatter went a few ways, including pointed fingers at Linden Lab for letting this and other good sims fade away.

So it looks like the ISM will be coming back, at least for now. While the problem of sims going dark still persists, at least this one will still be around.