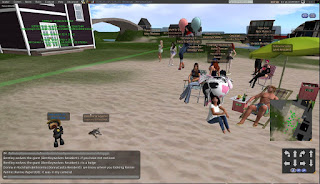 On Wednesday June 12, the Newser reported on new sims and Linden Home areas being set up at Bellisseria. That evening, I got a tip about someone there from my friend Ed (Edconnect Gufler). He sent me a TP over, though taking it, I ended up in the water. Swimming up, I noticed on the map a group of people on land to the west. So I went over, and among the group of people, and one squirrel, there was Abnor Mole, working away while an audience was watching, and chattering. 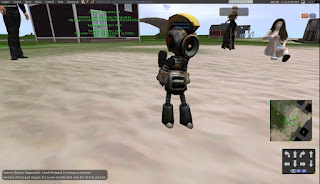 For the most part, Abnor just quietly listened as he worked on the houses and roads. But he would occasionally speak; "Feel free to watch from a distance all you like. (smile)"

When someone expressed a desire for a house to be next to some rocks, and another commented, "It would be cool if some waterfront homes were centered on the parcels so that the back of the house faced the water," Abnor answered, "Some of them have them, and some don't. But we can't make add or change them. The LI on the main parcel had to have enough remaining to always support the houses. The LI on the main parcel has been carefully calculated to allow for that. If we add more, we run the risk of not having enough LI for a house.. and that would be... 'bad'."

As there had been a talk about fences, Abnor commented, "But the fence is in the content pack, so she could add her own." 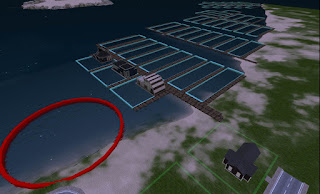 "Abnor, would there be like a little hang out area or park being added for the sims?" "That's what community areas are for... that red ring you see in the next region is where a community area is going to go."

More questions would be asked, and Abnor would answer. "Why are the LOD's so high?" "So they don't collapse into itty bitty triangles when you get more than 20m away."

"Are the houses and houseboats in this next release the same builds as the first ones?" "They look the same to me. (smile)"

"Oh Abnor, are we allowed to do shell's on the outside of the houses for more paint options, or would that be going against the look too much?" "Yeah... but if we start doing that then we'd spend all day just moving fences and trees and making sure the LI balances out... we'd never have time to make new houses."

When Abnor was asked about when the houses would be available, he answered, "The only person who can tell you is Patch. until he says something I know nothing. *winks*"

Someone brought up the green markers in the sims, "Did we already find out what the green spikes are for? If so I missed it." Abnor answered, "If people just type in the name of the region they teleport to the center. So from now on we are making it a point not to have that location be a resident's parcel."

There was also a little joking around. When Abnor was talking about when the moles built Nautilus, one resident responded, "Found the big eye under a bush (laughter)." The robot mole answered, "*whistles* I don't know nuthin bout no alleged 'eye.'" 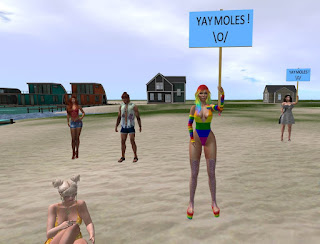 Eventually, someone asked, "You probably  get asked this but why did you chose 'Abnor?'" Another resident promptly gave the answer, "Abnormal, Abnor Mole." "ABNORMAL ! (laughing) I just got it!" "Like Whacka Mole." "(laughter) A few of the moles have punny names." "(I) would completely get 'Guaca Mole' as a Mole name ..." Abnor mused, "I still like my name. (smile) Someone I worked with for years just finally got the joke."

"All playing aside Abnor, what you guys have done with this is incredible and such a great effort all around." "We appreciate it we really do." Abnor soon responded, "This is different because I invited everyone to come, but I do want to thank you guys for letting us work in peace for the most part. Everyone has been really good about it and I wanted to thank you all for that. It makes the job a lot easier." The residents were appreciative, "Thanks for taking the time to talk to us and show us the new ones, Abnor." "Thank you for the sneak peek Abnor...you all are doing such a great job!" "THANK YOU MOLES!" Someone then spoke, "Who wants a 'YAY MOLES' sign to hold?" Then the person started passing them around.

Abnor also revealed what the source of the pickle jokes of theirs around the new continent, "... people said (the original SSP area) Bellisseria looks like  a dragon sitting in a boot eating a pickle.. so... We took that pickle and were going to cut out the center. So we started calling it 'the squished pickle.' But instead I terraformed the whole inside. But the name stuck. So that became 'The Squishy Pickle,' and then the bar followed."

Abnor went on, "What we call a 'community center' is just public places people can gather, like the swimming pools, the Squishy Pickle bars... locations like that. Someone asked, presumably about the one to be built for this area, "is it a huge secret what you are doing with that?" The mole answered, "It's a surprise Patch has, and Patch doesn't like moles ruining his surprises. (smile)." 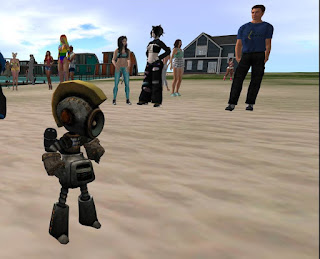 Abnor soon carved a river into the ground. One resident went, "Oh, I love rivers! Will like to live there." "Drawbridges for big boats!" someone else quipped. "Yes, I know. I've made them before," the mole responded, "They get tricky though." A couple people talked about when pranksters would open bridges when cars approached, or shut them when sailboats approached, and wondered if there could be a way to stop that. Abnor answered an ideal solution was unlikely, "Once you start getting into things to make it not work under XYZ conditions but always work under LMNOP, the scripting can get stupid complicated."

Eventually, Abnor had to go, "I think the refreshment I need now is sleep, and then I start back again in the morning (smile). But if you want to see regions in different stages of production... walk north from here over the bridge, keep going and hang a left at the big river." He then told the crowd goodbye, and called it a night. The crowd then dispersed, one getting a sailboat, and going up the river the little robot had just made.

So that was my chance encounter with Abnor Mole at the new Linden Home area. It was fun and informative, the kind of "abnormal" circumstances a resident of Second Life likes.