Interview With Six String On Being An Aspiring Musician 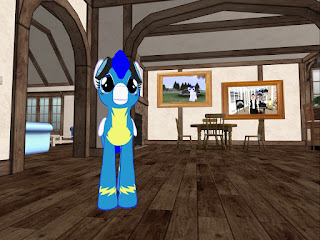 Six String (roleplayismylife) is more than just my Second Life partner, and real life boyfriend.  He is a musician on Second Life to happened to be an inspiration as well.  I was lucky to recently be able to have an interview with him about his career on Second Life as a musician.

My first question to Six was how long had he been a musician on Second Life.  “Well, I'm not really sure," he replied, "since I've only had a small hoofful of opportunities to perform for everypony in Second Life.”

Asking Six where he usually performs, he answered, “I've only performed at The Tipsy Cow." When I asked if there were other places he could think of, he answered he's done private performances for friends.

I asked Six String if he is going to continue performing on Second Life. He replied, “If I'm given a chance to, yes.  I have offered to other places, but was turned down without them even hearing one note from me.”

My next question to Six String was what is his dream.  “Well I did have a really crazy one last night where--Oh, you mean my goal in life," he answered, "To entertain people with my music, if possible.”

I asked Six how he feels about being a musical inspiration even through he doesn't usually play music on Second Life.  “ It's great," he told me, "I don't feel like I'm much of an inspiration, but someponies think that I am, which is good.”

My last question to him was what are his longtime goals on Second Life.  “Being able to get a steady job as a musician in SL, so that I can support my SL family, and help pay the cost of renting the lots here at Cape Heron," he answered, "It's a tough burden ... I should be helping out.”

I smiled at Six String.  I really do love Six String because he is my Second Life partner as well as real life boyfriend.  That's not all.  Six String works with me since he is an inspiration.

Deaflegacy
Posted by Bixyl Shuftan at 6:00 AM