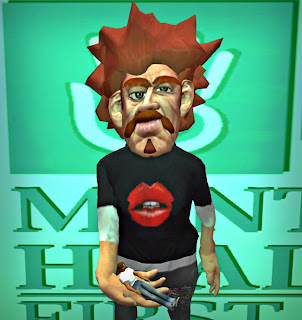 Adolf Chaplin, known as Kake Broek in Second Life, has been known in some circles for his satirical artwork. Often strange and weird, and sometimes not safe for work, his art (Flickr Page - warning definitely not safe for work) was described in a New World Notes article as "Broek’s challenges convention without fear of offending." He was mentioned in a Newser article as having one of the few pictures in "Avatars Against Trump" made in humor. But satire can be a difficult art to understand even when done by an expert. Sometimes it's too subtle for the point to come across easily, or someone just doesn't get the point. Or sometimes when pushing limits an artist gets a much stronger reaction than expected, which may include lasting consequences. 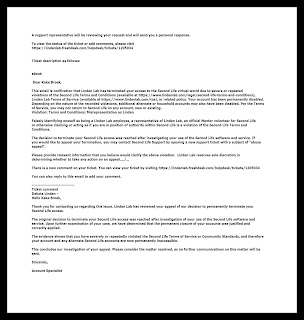 On May 31, Kake posted a letter in his Flicker page sent by Linden Lab in which they stated he had been banned "for severe or repeated violations of the Second Life Terms and Conditions ... or related policy." The violation was "Misrepresentation as Linden. Falsely identifying oneself as a Linden Lab employee, a representative of Linden Lab, an official Mentor volunteer for Second Life or otherwise claiming or acting as if you are in position of authority within Second Life is a violation of the Second Life Terms and Conditions." He had appealed, and the Lab's response was, "we have determined that the permanent closure of your accounts was justified and correctly applied. The evidence shows that you have severely or repeatedly violated the Second Life Terms of Service or Community Standards and therefore your account and any alternate Second Life accounts are now permanently inaccessible." The Lab went on to say the matter was over and done with and there would be no responses to further communication.

In an article by Hamlet Au, Kake was quoted as saying, ""Maybe 'cause sometimes I'm wearing overhead text, 'I'm not a Linden'. But clearly I'm just a common good citizen old clown invested in the grid [for] 11 years, never griefing, harassing, hacking or any aggressiveness. And anyway, this conviction is so enormously disproportionate. I'm shocked sad and so disappointed!" 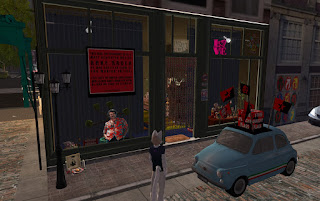 Others began writing to Linden Lab in support of Kake, and his alts which were also banned, including DrFran Babcock whom wrote for the Newser in the past. But the Lab's response was, "While we appreciate your concern for your friend, we are only able to discuss account matters with the owner of the account. Please have this person contact us if they are having issues with their account." So in effect, he was in a catch-22, the Lab telling his friends if the person had a problem that he himself should contact the Lab, but telling him not to bother calling again as they considered the matter closed. Not everyone commenting was in support of Kake, one remarking in the comments after Hamlet's article, "People who do this kinda expressive work and then fall into the abyss they have created for themselves, remind of me of how a Bart Simpson concert goes. Opening with Love and closing with I Just Can't Help Myself." 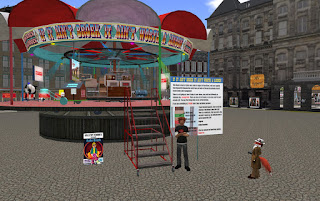 On June 6, there was apparently a protest in the Amsterdam sims in Kake's support (article not safe for work). He had an exhibit in a gallery at the same area, at Amsterdam (23/166/25) which has since been modified into a memorial of sorts by his supporters. On the wall is a sign, "This was the residence of SL's most dedicated artist Kake Broek. He was expelled from SL for making satire." On the sidewalk rests a picture of one of his oddly-shapped avatars with candles next to it, set up as if honoring the dead. In the next sim at Amsterdam 2 (141/210/25), there is a carousel set up also to protest Kake's banning made by Dekka Raymaker, "If it ain't Broek, it ain't worth a Linden." A panel in front of the interactive artwork reads, "This Round-a-Bout art piece was made in support of Kake Broek, who was expelled from Second Life because his world view and satire of Second Life probably doesn't match Linden Lab's management." On the carousel itself were messages like "censorship reflects Second Life's lack of confidence in itself."

As the Lindens do not go into great detail about why they ban someone, such as last year when buisnesswoman Luna Pawpad was banned from Second Life for no clear reason, Kake's expulsion invites speculation as to the exact reasons as to why. As Linden Lab has spoken out against the actions of the current President in the past, the artist's poking fun of Donald Trump can be ruled out. As his art can be strange and weird, it's understandable people would have a problem with it. But is making art in questionable taste reason enough to throw someone out of the Grid?

There was one satirist whom got some attention in Second Life a decade ago, Christophe Hugo. His "Caricavatars" was the subject of controversy, both for it's political humor and that he would sometimes ban people from the area. He would state that his time in Second Life led him to conclude a "for-profit" virtual world wasn't the best place to express satire as the owners "want to be mainstream, and will avoid controversy at all costs and aim for political correctness, even if it means curtailing freedom of speech." Christophe though stated he wasn't banned, but left on his own. So except for inside the corridors of Linden Lab, just exactly why Kake was banned may remain unexplained.