Trolls have harassed stores throughout the history of Second Life. But it's not often when it's the store that does the trolling. 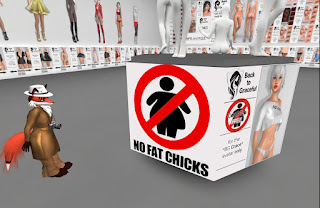 The "No Fat Chicks" meme has been around for some decades, both an insult to women of large size and a suggestion that the speaker is both shallow and insensitive. As it's usually men with juvenile streaks in their mentalities that use it, I was surprised to hear about a store that had a sign with the slogan, and an image of a black outline of a large woman with the international "not allowed" red slash sign. Beside the sign was another offering free "No Fat" shirts made for the store's (thin) female avatar.

Looking at the profile of the owner, I found this description: 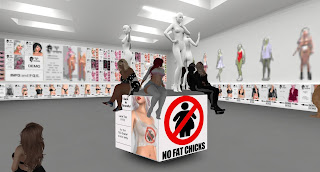 Yours truly has seen a few female avatars in the past several years sporting what could be called a "Kardashian" look, large behinds and thighs. While there are ways to suggest the more extreme forms of this kind of look are less than realistic, this is hardly the way to do so and expect people to listen. On the Second Life Friends Facebook page and New World Notes, there were pictures and descriptions of protests of women avatars, both large and otherwise, at the store. While yours truly came at a time there weren't any, there was someone at the store who told me there had been, "Yesterday there was a protest here, it's a horrible shop. Today I came to see if there were people protesting."

But have the protests backfired? The presence of the women were certainly an increase in traffic, which does get noticed by the inworld Search function. So they may have inadvertently ended up drawing shoppers to the place. There was a sign at the store placed by the owner that appeared to be aimed at the protesters. 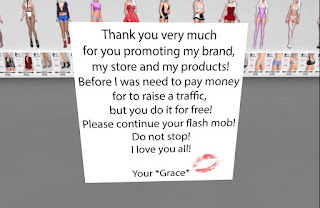 Thank you very much for promoting my brand, my store and my products! Before I was need to pay money for to raise a traffic, but you do it for free! Please continue your flash mob! Do not stop! I love you all!

So if one can look however they want to, why would these girls chose to be plump? Yours truly can think of a few reasons. Maybe they don't want to look like everyone else. Maybe they're plump in real life and see wearing a thin avatar as being less than honest. Maybe they're trying to avoid being IMed for sex repeatedly. In any event, it's their avatar, and with a few exceptions such as racial stereotypes, they can look however they want to.

And it's my impression most men would prefer a woman with a few extra pounds and a sweet disposition than a thin woman who's a rhymes-with-witch.