Update on the Politcal Locations 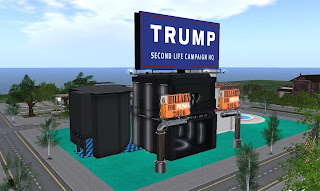 Since it was revealed that the Trump HQ and Manor had moved out from the Lionheart Ahadi sim, and a Hillary Clinton HQ erected in it's place, there have been a few developments on the political side of Second Life. When I dropped by to interview Candace Larganta, the owner of the Clinton HQ, there was a new Trump building next to it, this one with "Hillary for Prison" signs. I would later get in contact with JP Laszlo, and he would confirm, "Yes that is (by) myself, myself and my friend." When asked why he didn't leave a marker at the old location, "Biding my time.....I also don't have anywhere for people to go so I'm mainly just putting the sign there to irritate the Hillary people."

About when the new Trump HQ would be open to the public, JP stated he couldn't give a date due to complications, "Wish I could. I wish I knew myself, I really do. My builder is tied down at work and grabbing every spare minute they can. Be aware though the tone of the place has shifted somewhat tongue in cheek. ... It is more of a hangout and less of a serious HQ anymore. Trump supporters come here, even non Trump supporters. We all have a good time and the sim is Trump-themed but beyond the theme we aren't pushing an agenda."

Of their new build, JP stated it was being based on the building in a rather strange video titled "Japanese Donald Trump Commercial," saying of the build,"The style is authoritarian vaporwave. It's going to be very abstract and surreal. ... the capital building is a sim length, takes up the whole north end of the sim. It's (one) quarter hangout, (one) quarter art project, (one) quarter political expression, and a quarter personal project." 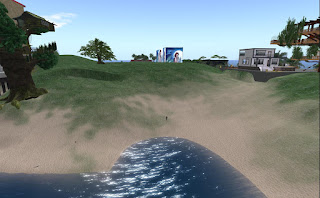 JP stated that the Sanders HQ in Caspoli was gone, "Well, Bernie's campaign is over. He hasn't got a chance. So why would they waste money on land?" JP was a little unhappy with them over the earlier accusations about their Trump Wall trying to infect people with a computer virus, "My friend was putting up endless signs to get them to apologize for saying she tried to infect people with a virus over the whole teleport thing. In the Bernie group they sent a notice saying they were closing partly due to 'ongoing harassment.' Well I'm sorry if asking for an apology for defaming remarks is harassment in her book, good riddance. ... I am sure even yourself would feel injustice of being accused of such things when you were merely attempting to engage in friendly banter." When I mentioned the "less than friendly banter, thrown around by members of both parties," JP responded, "Sure is, but one cannot control what others do. All one can do is aspire to fight a clean fight by ones words and actions. And I assure you I have done just that in real life and Second Life. I have played by the rules and punched above the belt." 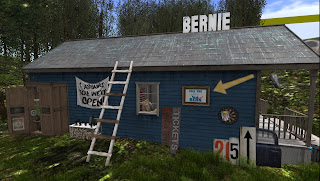 Dropping by the Caspoli sim, the Sanders HQ location was indeed gone, the area now an unspoiled beach instead of a monument to what might have been. But heading to "Feel the Bern" at Young (162/26/2018), the location was still up. Somehow, the sign "I assure you, we're open" sign seemed a little more prominent. When I contacted the owner, Addie Tozz, she would only respond that she would continue to support Sanders. 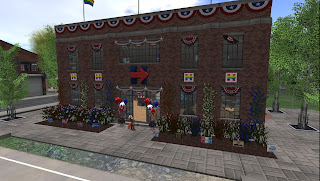 Following my interview with her, Candace Larganta informed me there was a new Clinton HQ that had gone up, this one in Bay City, at (Argos 36, 253, 25). Dropping by, it was a two-story brick building. On the inside was a podium where someone could give a speech to a small crowd, with American and Bay City flags on either side of the stage. To the right were givers for free Clinton T-shirts, both men's and women's, and campaign signs for Clinton and "Dump Trump." Upstairs there was a simpler stage with a Clinton campaign poster behind it that looked a tad propagandish. 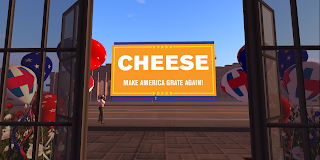 Across the street, it was clear a Trump supporter was out to "irritate the Hillary people." Someone had set up a huge (or is that huuuge) "Trump: Make America Great Again" sign. But later on, one of Bay City's residents showed me a picture that showed the locals were more than capable of matching the Trump supporters jabs with their own humor: "Cheese: Make America Grate Again."

So what else will the Trump supporters do in Bay City? We're "nacho" sure.

Stay tuned for more political news in Second Life as one of the more unique US Presidential elections in recent history is reflected in the virtual world.