There’s lot of things to do in Second Life including seeing a play. The well-known Xavier Thiebaud himself created one with the help of Szerewp Loon as the director. The story was written by Antoine de Saint-Exupéry according to Wikipedia (entry link). The play itself is being featured at the Royal Opera and Ritz Ballroom here at Oceanea (82/109/1153). There was a performance at Sunday at 2pm SLT on March 15th. 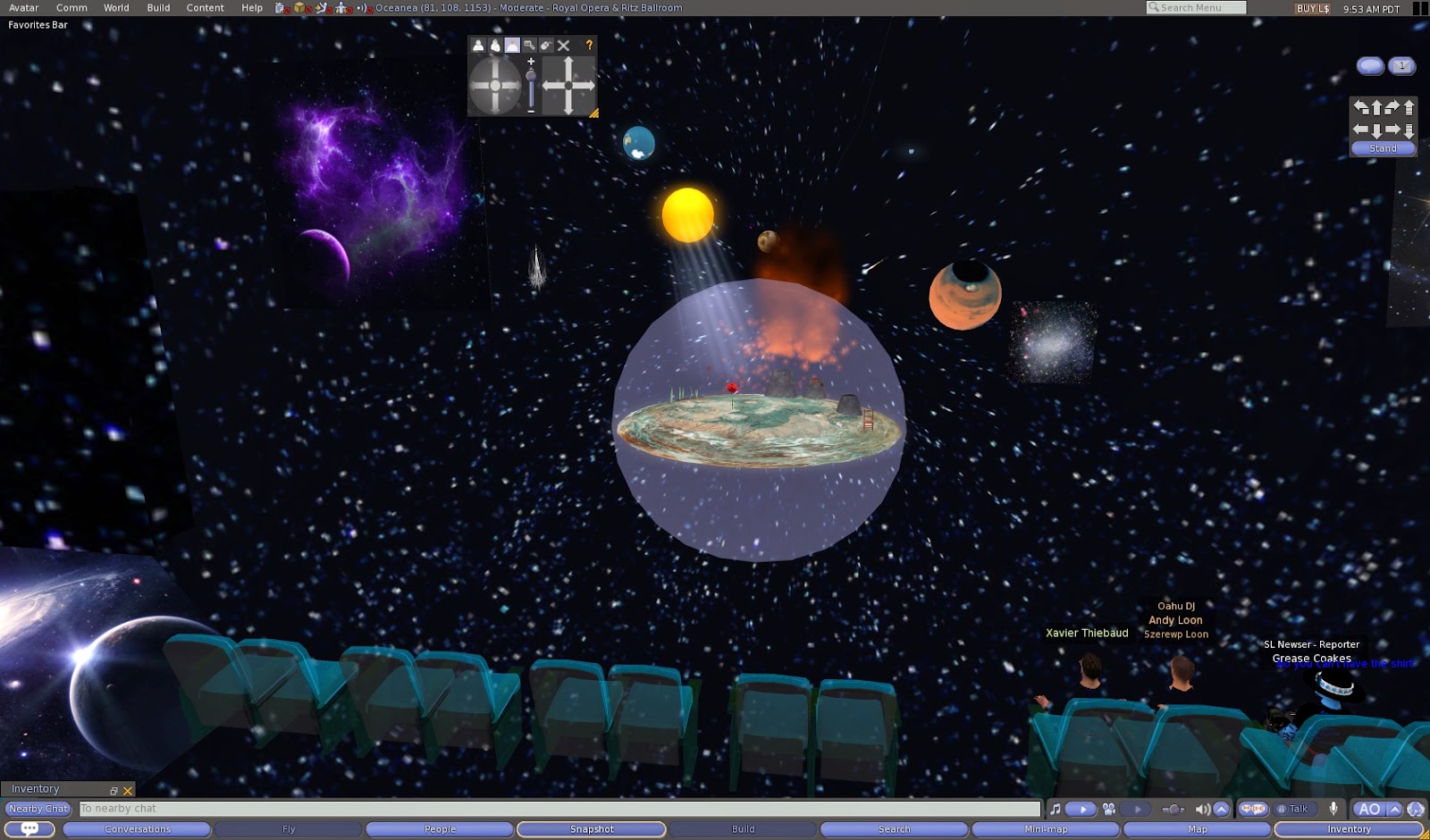 Xavier explained that the Little Prince is basically falling to earth, "but it's about exploration and love and innocence and wisdom."

I answered back with, "I think lots of people may relate to the story as sometimes they may feel alone or as an alien in some situations."

Lots of people seem to relate to the play/story that Xavier and Andy produced. Xavier told that it has "been sold out everytime it's been shown in SL."

Andy Loon (Szerewp Loon): "Our performances was record of frequence."

Andy said that lots of times on Earth, the Little Prince might see something we take for granted that he would see as very special, "(The) Little Prince is a person who is surprised (by) many situations objectively unnatural, though obvious for us. And so a huge amount of roses on Earth. The Little Prince really thought that in the universe there is only one rose ..." 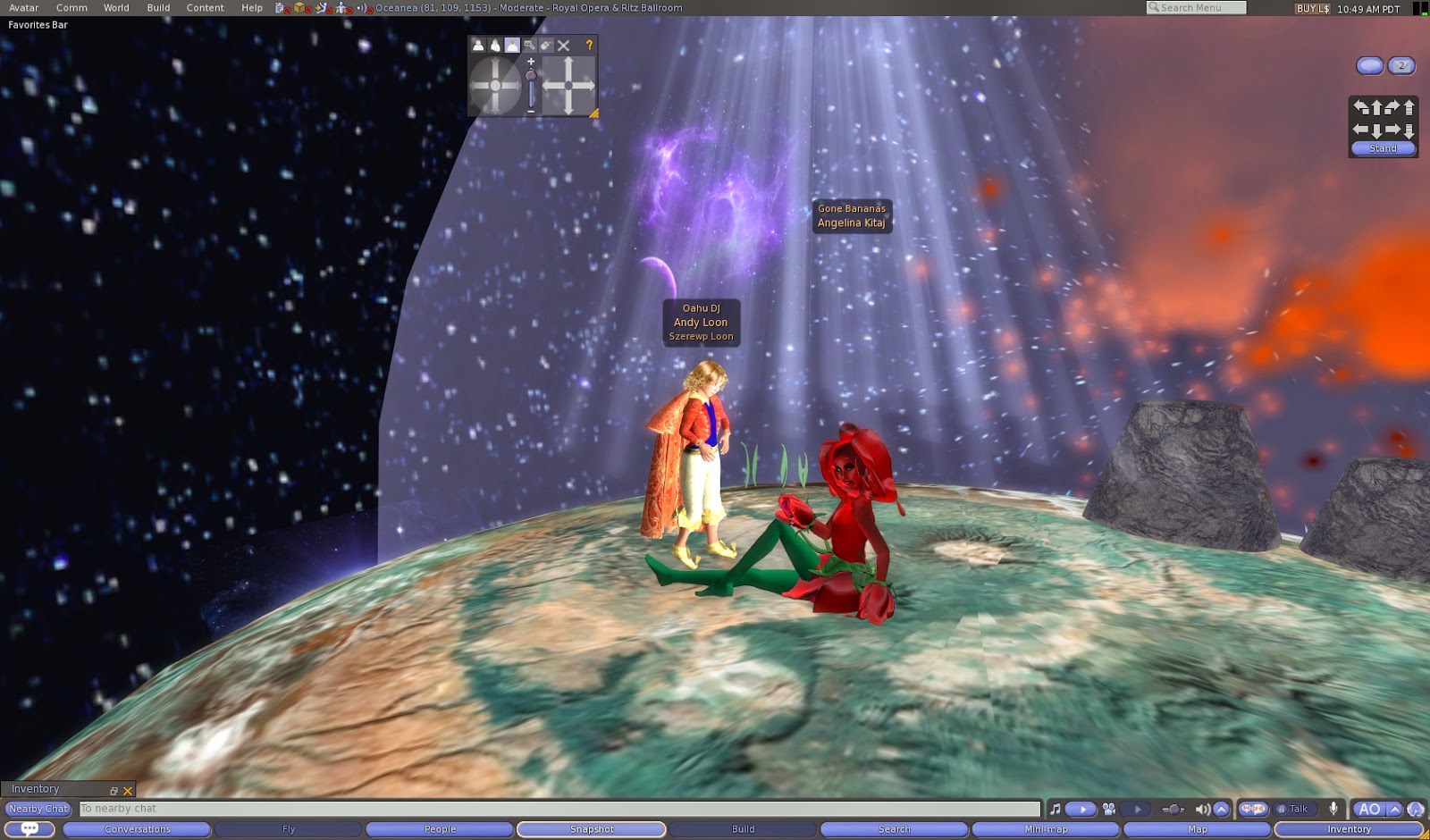 Xavier Thiebaud, "He thought his rose was special, because he thought only one existed in all the universe.

Xavier said he approached his friend Andy Loon and presented the idea of the Little Prince play. A play of this magnitude was never done before but Xavier and Andy explained they did it for the passion and story, but not so much to see if could be done. In fact what can be done in SL can’t be done in the real world as Andy said, "SL gives far more possibilities of realization than RL."

I said in response, "Yeah what you can do in Hollywood and Broadway is one thing. But only in SL could you make a harmless volcano and a room looking like a whole universe."

Grease Coakes, "What are the lessons that they teach?"

Andy Loon (Szerewp Loon), "(The) snake gives to (the) Little Prince hope, and (the) fox gives to him friendship."

Andy Loon told me the names of the actors and what roles they played, "Angelina Kitaj was rose, snake and fox.  Orionek Twist was the pilot, king, drinker, and the businessman and geographer."

At first Xavier wanted to have it done over voice chat with singing and voice and not text. When I asked who built and scripted the sets I thought it would be a whole team of builders and scripters I was surprised to hear it was Andy Loon did everything by himself.

What Xavier suggested, and it sounds good advice, is to arrive early to make sure you get a seat and no you don’t have to pay to get in. The problem isn’t paying a linden price but making sure you get there ahead of the crowd before the theater fills up. Xavier also suggested to join his A List! Group to get all the best updates about Second Life. As one of Xavier’s buddies if you IM or notecard Xavier mentioning my name Grease Coakes it grants you a free entrance into Xavier’s A List! Xavier also suggested reading the story before you come to the play so you have a clearer idea of what’s going on.
Andy suggested this site to read the story ahead of time:
http://www.odaha.com/antoine-de-saint-exupery/maly-princ/the-little-prince.

Xavier happened to say this about his friend and director of the play, "Also Andy has been doing opera and plays and musicals and ballet for several years in SL, everything from Josephine Baker and the Moulin Rogue to Romeo and Juliet and Tales of Hoffman to name a few."

When I asked how long it will be in SL Xavier told me, "We have not decided yet, suffice to say. Grab the chance to see it. We're booked through April."

Angelina Kitaj came by and showed me one of her costumes for the play. She played the role of the rose for the Little Prince played by Szerewp Loon AKA Andy Loon. She also showed me her role as the fox in the forest as she befriends the Little Prince teaching him the lesson of friendship, "it's hard work to get to be friends." 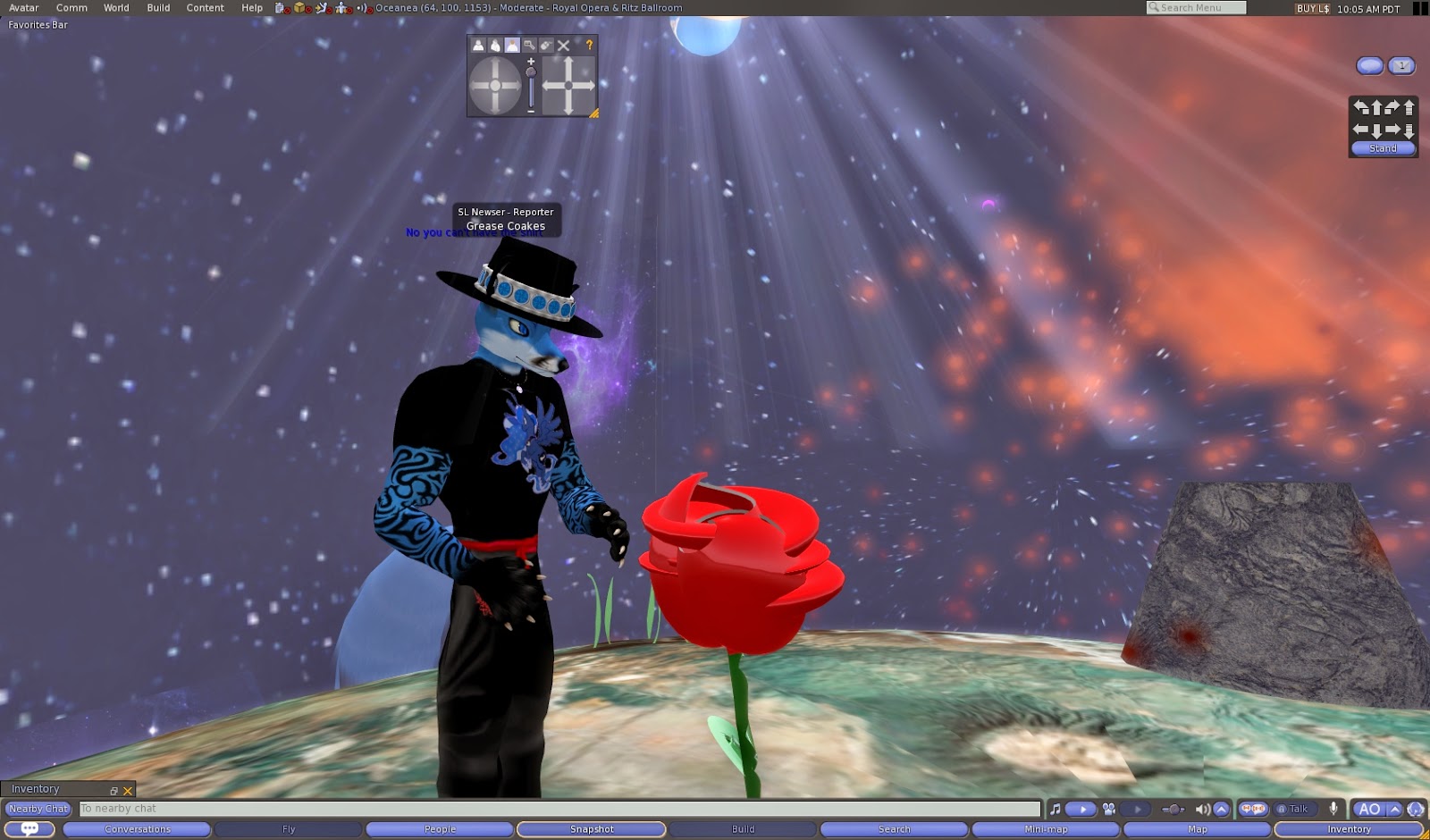 I answered back saying, "Yes it is. You don't always agree with each other and you have to be aware of each other's needs and wishes."

By the sound of it seeing the play is a must see for everyone in Second Life. You had better run to see it before it’s too late and the little prince has gone back to his little asteroid.

Grease Coakes
Posted by Bixyl Shuftan at 6:00 AM