Scattered through the books in the library, one will find certain phrases, verses, paragraphs or chapters that make a lasting, lifetime impression. We remember them word for word, what book they came from or even what page they are on. In unexpected moments, they come back to our attention. They may even have a strong effect on the direction of our lives.
In a book titled, "Eternal Words", The Immortal Series, Book IV, by Author/Teacher J. J. Dewey, there is just such a passage. In this somewhat science fiction story, the main character meets and works with an individual who is the most powerful being on the planet. Like a Wizard of Oz, few people have ever seen this being's face. All that changes, when Joe gets to see his face for the first time. On page 241, we read these two paragraphs:

I thought about his comments on beauty as I gazed upon his face having, not two, but one great eye in the center of the forehead! This was the only visible feature that set him apart from the features of a regular human.

My reaction to this sight was much different than I would have previously guessed it would be.  The reason was that any previous image I had seen of a one eyed person, or Cyclops. was portrayed as abnormal and subhuman in beauty, but this being was different. Instead of being abhorred by the difference, I found myself captivated by it.  It's difficult to describe, but his face was put together in such a way that the eye became a royal diadem, a thing of great beauty, like the jewel in the lotus. 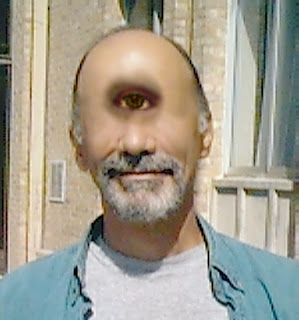 I can see how it would be difficult to describe. Even with a great imagination, it is hard to picture this in my imagination. I had to, as an artist, get something on paper.  Here (left) is an early attempt at photoshopping a photo of my old friend Rick. He's a friendly, soulful guy and the loss of one eye doesn't take away any of that. If anything, it would peobably make him even more popular than he already is. Picture him, at your next party. There would be a crowd, gathered around him, captivated by every word that came out of the one eyed guy's mouth. Nobody would even notice that brand new dress,  you bought for the party.
While exploring Star Journey Island, Joshua got a free package of Mardi Gras masks. Instead of being worn like a face tattoo, these were flat objects with a texture on them. The object is worn on the nose and gives the impression of being a form fitting mask. Because of the 3D shape of the face, it's hard to create an avatar with only one eye, using skin or tattoo textures. This technique seemed like a good way of doing so. 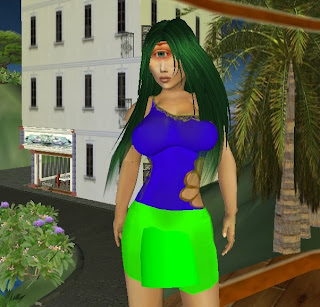 A photograph of an eye was chopped, mirrored, and pieced back together, to create a symetrical, single eye and then was uploaded to Second Life. The texture was applied to a prim, attached to Sha's nose. Then the texture and prim both got sized to fit her face.The result was photographed and touched up, to smoothly blend it together, for the above image. Not bad for a first attempt. We'll have to experiment more with the idea. As is, we begin to see that it might be possible to create a beautiful cyclops. Perhaps the SL Newser could host a contest, challenging SL artists to create the most beautiful cyclops. The contest would be open to everyone, unless you are an Argonaut, calling himself Noman.

Becky "Sha" Shamen
Posted by Bixyl Shuftan at 6:30 AM