This is Your Life, Grease Coakes

Grease Coakes, SL Newser Reporter, was rezzed on June 12, 2007. This makes him six years old—an old-timer in this virtual world that is about to be ten years old. SL Newser sat down with this remarkable griffin on June 11th to learn a little bit about him, and see what he was up to. Grease needed no prompting:

Grease Coakes: Tomorrow is my sixth SL birthday and I’ve done a lot in Second Life™. I’ve learned to deejay,  I’m well known in furry clubs, and humans are familiar with me. I think that says a lot about an avatar, for SL.

SL Newser: How did you come to be in Second Life™? 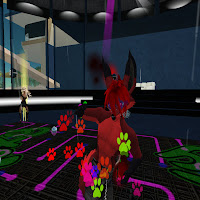 Grease Coakes: Well, a friend from Neopets (the online virtual pet community) was saying I should check out Second Life™. I had no idea what it was about. I came on like a complete newbie, and my friend told me about camping for Lindens, so I tried it.  At first, I wasn’t earning jack, but then I figured out I could buy Lindens with real money, and I bought for my first furry avatar: a mutant red fox from Mutation Industries. I thought I was too cool walking around in that ugly avatar.

Grease Coakes: I spent my own money a few times, but when I learned you could work in SL earning Lindens I wanted a part of that. I think the first job I got was as a male stripper for a club that’s long gone called The Spot. I used to hang out at a club that’s Dance Island now, but was called TJ Icey’s. Just for kicks I still use their really old glowsticks. I met RAFTWET Jewell there, who is one of the co-owners of the A-List and is Xavier’s wife, and Sneaky Krugman, a deejay who almost never changes his clothes. He’s always dressed in his longcoat and that Russian hat.  Later on I learned to host for a club that’s still around, Blackhearts Café, that you may have heard of—that plays 80’s music. I think back then in 2007/2008 it was a new club. It was fairly popular as an 80’s club. I guess it was a new thing in SL, an 80’s club, so lots of people came while I hosted and I made good money. 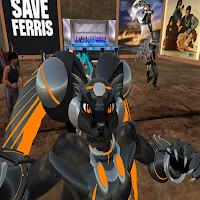 By that time I had my second avatar, an Aventity black fox. I started buying those like crazy, but the thing was I was earning the money from hosting instead of going to my debit card. I also found out about furry clubs a little later. Before, I only went to human clubs. The first furry club I went to was The Ark. Other furries, when I mentioned human clubs, said I was lucky for not being ejected as a furry, or at least being griefed. I guess I went to the right clubs back then. Even Blackhearts Café, a human club, got so used to me they let me host there. So I might of been the first furry to host at a human club in all of Second Life™.

I ran into Tantari Kim at The Ark, who became one of my friends for a long time. She also gave me positive feedback about my children’s story before it got published. So she has always been a good friend.  And she's the leader of her very own Vixen Scouts. Every time I IM her to say “hi” she always says “arf!” Yeah Tantari is a helpful and kind person, but I can’t join her Vixen Scouts because I’m a guy. She likes recruiting vixens that are helpful and kind like her. She’s also been in SL a long time (2004), a longer time then me. So, even if I’m old in Second Life™ at six, her avatar is almost a decade old. Her last name, Kim, was the only last name she could pick out back then

SL Newser: Will you be deejaying at SL10B?

Grease Coakes: Yes, I might have to change my time though because it conflicts with a game I play over Skype. For those who haven't heard me I play house trance and video game remixes.

SL Newser: Have  you been a griffin for long? 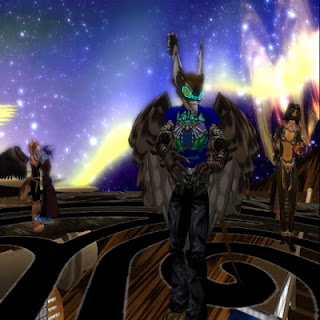 Grease Coakes: Yes, for a while. The first griffins I bought were Toshuki, and today I have all nine of their colors, even the pink color.  One way or the other I’ve found a way to earn Lindens in SL. I haven't bought Lindens with real money for a long time. I’ve been in tail sales; lots of them (See: http://slnewserextra.blogspot.com/2013/02/at-tail-sale.html ). In fact, speaking of pink anyone who buys my children's story for 250L in SL gets a pink shirt with the book cover on it that is also a sixth birthday shirt. So far I have had three people buy it.

SL Newser: So, tell me about the book. How did you come to write a children's book?

Grease Coakes: Well I always remembered the Richard Scary books with the talking animals. As a kid I related to those stories, so I was a furry at heart although I didn't what it was a called back then. I thought wouldn’t it be cool if I wrote something similar? My character deals with something that children might relate to in the real world.

My book was rejected many times, but in real life a woman did help me. I found her first life phone number on a website called Literary Market In the end she didn’t accept my book, but she was encouraging me and giving me advice. Her name is Annette Johnson, and she runs allwrite publishing. She’s a nice lady, and even though she did not publish my book in real life she helped a lot, just like Tantari Kim did. She was proud of me when I published my book in first life through a website called lulu.com It cost me a lot of money, but I was excited when I saw my book get published. I used a tax refund, so I didn’t really lose out. I can promote myself too in Second Life™.

I like having fun too. I just blew 4,000 Lindens on buying an artist at a tail sale. I forget what club it was though.

SL Newser: Could you please explain about tail sales for readers who might not understand?

Grease Coakes: At a tail sale, for example, a furry can bid on me for my writing abilty. The last furry who bought me wanted a story about pirates, so i wrote a high seas adventure with his character and his girlfriend. One time, Dragon Heart bought me at a club for 5,000L. I kept 2,500 the other 2,500 went to the club to help pay for club fees. He had an interesting request, one that isn't suitable for the SL Newser (grin).

SL Newser: OK, we can move along…

SL Newser: So, what would you like for your birthday? What gift would make you the happiest ?

Grease Coakes: Probably just people buying my book, Ginny Griffin’s First Day Of School, and then turning around saying it was a good book .

SL Newser: And, you said it deals with something folks could relate to in First Life ? 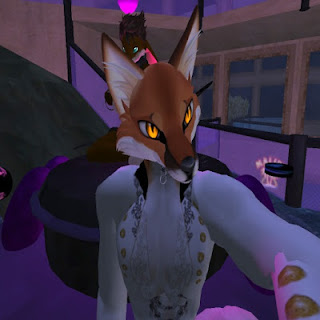 Grease Coakes: Yes, for children on their first day of school who don’t know anyone. Ginny Griffin runs into some bad things at her new school. I won't say what, but it’s a big issue now.

Starting tomorrow I will start handing out limited edition shirts to celebrate my SL birthday. I’ll be handing them out for a week or so, and after that no more shirts. Last year I handed out my fifth SL birthday shirts only on my SL birthday.  Giving away the shirts is fun as they are limited edition, making them rarities, like Linden bears.

Find Grease Coakes and get a limited edition birthday tee shirt, see if you can guess what issue troubles Ginny Griffin on her first day at school, and:

DrFran Babcock
Posted by Bixyl Shuftan at 6:00 AM